BBC Stargazing Live 2014 has been asking people to visit the Zooniverse’s Space Warps site to identify gravitational lenses: extremely rare events caused by one galaxy passing in front of another (very distant) galaxy. Tens of thousands of you have taken part and classified more than 6.5 million images.

Your classifications have already led to the discovery of more than 50 potential gravitational lenses! Amongst them are several beautiful and interesting discoveries. You can see a few of our favourite candidates above. For Stargazing Live’s third and final show we have focussed on the spectacular red arc/ring shown below, it has been nicknamed 9io9 by the team right now, because of it’s Zooniverse ID. You can see more of what our volunteers are saying about it here on Talk.

The Space Warps team have produced a model of it and currently think the background (red) galaxy is at redshift of about 2, which means the light has taken more than 10 billion years to reach us! You can see the comparison of the model and the data below. There’s a chance it could be further away but we’ll keep you posted. The nearer object (white/yellow) is about 2 billion light years away and has a mass of 100 billion times that of our Sun – which makes it about the same size as our own galaxy.

We know all this because we have spent the last 24 hours calling in every favour we have worldwide. The Space Warps science team, and various Zooniverse scientists from other projects, have been literally asking favours from people using the world’s biggest telescopes. We were even able to get some time on the massive Keck telescope in Hawai’i, where astronomers were having to break ice off the dome to get data. Astronomers love a good challenge!

Of course Stargazing Live is filmed at Jodrell Bank, home to one of the world’s largest radio dishes: the Lovell Telescope. This candidate lens is perfect for a radio observation – which can tell us more about its mass and position in space – and I’m excited to say that the giant dish is observing the target as I write!

Space Warps has been a huge success over the past three days and the project continues! Every classification on Space Warps helps our computers understand the whole data set, and so in a way all the objects discovered on Space Warps are the result of everybody’s combined work. You can keep up to date with news from Space Warp via the project’s blog, Twitter and Facebook sites.

A huge thank you to the BBC crew, the Jodrell Bank team, the Space Warps scientists, developers and moderators, and to everyone that took part this week. Keep clicking!

This week is the BBC’s Stargazing Live show: three now-annual nights of live stargazing and astronomy chatter, live from Jodrell Bank. In 2012 we asked the Stargazing Live viewers to help us discover a planet with Planet Hunters, in 2013 we explored the surface of Mars with Planet Four. This year we are inviting everybody to use our Space Warps project to discover some of most beautiful and rare objects in the universe: gravitational lenses.

Space Warps launched last year and originally the project asked everyone to spot gravitationally lensed features in optical images from the CFHT Legacy Survey. We’re still busy processing the data but you seem to have found lenses – including the three shown at the top of this post! For Stargazing Live we’re adding a whole new dataset of infrared images, which has not been deeply searched for lenses before. We’re also now working with ’targeted’ data. This means that we are only showing images containing objects in them that could either be lenses, or would be interesting if they were being lensed. So your odds of finding something amazing have really gone up!

Gravitational lenses occur when a massive galaxy – or cluster of galaxies – pass in front of more distant objects. The enormous mass of the (relatively) closer object literally bend light around them and distort the image of the distant source. Imagine holding up a magnifying glass and waving it around the night sky so that starlight is bent and warped by the lens. You can see more about this here on the ESO website.

We’re blogging right now from Jodrell Bank (the dish is looking lovely BTW) and the Stargazing Live set and everyone here is buzzing with the idea that we might find some gravitational lenses that have never been seen before! Good luck, and happy classifying. Even K9 is excited.

For more than a year, we’ve been openly accepting proposals for new Zooniverse projects and this has brought to life projects such as Seafloor Explorer, Snapshot Serengeti, Notes from Nature and Space Warps. 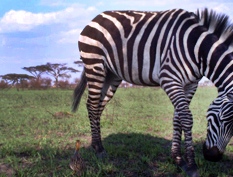 Yesterday, five Zooniverse projects were featured in The Biologist’s 10 Great Citizen Science Projects – several of them were ideas proposed by researchers we had never met before they came to us and said ‘hey, I have a cool idea for a project‘. We’ve also recently seen articles about how the Zooniverse might be able to help in a crisis and how we provide an excellent avenue for proactive procrastination. Citizen science projects are wide and varied and lots of researchers have great ideas.

So this is a good time to remind everyone that we want to hear from researchers with ideas for Zooniverse projects. If that’s you: propose a project! We have funding from the Alfred P. Sloan Foundation to build your great ideas and work with you to further science. We also have an incredibly talented team of designers, developers, educators and researchers who want to make your idea into an awesome new Zooniverse project.

If you want to know more about this, you can get in touch with any of the team or via our general email address or on Twitter @the_zooniverse. We’re currently working on projects that were proposed earlier this year and we’ll be announcing them soon. Maybe yours will be next?