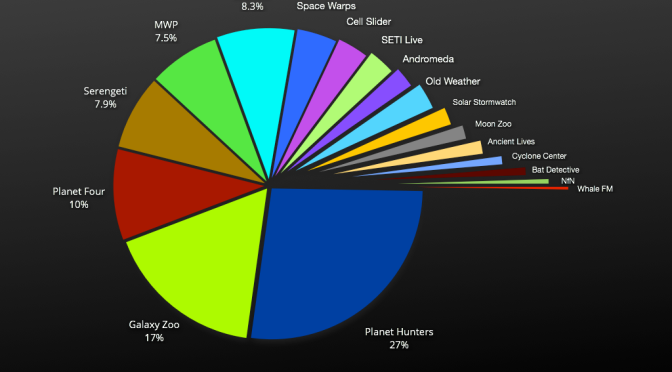 At ZooCon last week I spoke about the scale of human attention that the Zooniverse receives. One of my favourite stats in this realm (from Clay Shirky’s book ‘Cognitive Surplus’) is that in the USA, adults cumulatively spend about 200 billion hours watching TV every year. By contrast it took 100 million hours of combined effort for Wikipedia to reach its status as the world’s encyclopaedia.

In the previous year people collectively spent just shy of half a million hours working on Zooniverse projects. Better put, the community invested about 52 years worth of effort[1]. That’s to say that if an individual sat down and did nothing but classify on Zooniverse sites for 52 years they’d only just have done the same amount of work as our community did between June 2012 and June 2013. The number is always rising too. Citizen science is amazing!

Another way of thinking about it is to convert this time into Full Time Equivalents (FTEs). One person working 40 hours per week, for 50 weeks a year works for 2000 hours a year – that’s 1 FTE. So our 460,000 hours of Zooniverse effort are equivalent to 230 FTEs. It’s as if we had a building with 230 people in who only came in every day to click on Zooniverse projects.

This amazing investment by the community is not broken down evenly of course, as the above ‘snail’ chart shows. In fact Planet Hunters alone would occupy 62 of the people in our fictional building: the project took up 27% of the effort in the last year. Galaxy Zoo took 17%, which means it had almost 9 years of your effort all to itself. Planet Four had a meteoric launch on the BBC’s Stargazing Live less than six months ago and since that time it has gobbled up just over 5 years of human attention – 10% of the whole for the past year.

What’s wonderful is that our 230 metaphorical workers, and the 52 years they represent, are not confined to one building or one crazed click-worker. Our community is made of hundreds of thousands of individuals across the world – 850,000 of whom have signed up through zooniverse.org. Some of them have contributed a single classification, others have given our researchers far, far more of their time and attention. Through clicking on our sites, discussing ideas on Talk, or just spreading the word: Zooniverse volunteers are making a significant contribution to research in areas from astronomy to zoology.

Congratulations to everyone who’s taken part and let’s hope this number increases again by next year!

[1] In my ZooCon talk I incorrectly gave the figure of 35 years. This was wrong for two reasons; firstly, I had neglected Andromeda Project, Planet Four and Snapshot Serengeti for technical reasons. Secondly I had calculated the numbers incorrectly, in my rush to get my slides ready, and I underestimated them all by about 20%.

3 thoughts on “52 Years of Human Effort”