A few months ago we quietly placed a new project online. Called Sunspotter, it was essentially a game of hot-or-not for sunspot data – and since there were not many images available at the time, we thought it best to just let it be used by the people who noticed it, or who had tried it during the beta test. The results have since been validated, and the site works! In fact there are even preliminary results, which is all very exciting. Loads of new images have now been prepared, so today Sunspotter gets its proper debut. Try it at www.sunspotter.org.

On the site you are shown two images of sunspot groups and asked which is more complex. That might sound odd at first, but really it’s quite easy. The idea behind the science of Sunspotter is summed-up neatly on the Sunspotter blog:

I’m pretty sure you have an idea of which is the more complex: a graduate text on quantum mechanics, or an Italian cookbook? On the other hand, it would not be straight-forward for a computer to make that choice. The same is true with sunspot groups.

Or put another way: like many things in life, you’ll know complexity when you see it. Try it out now: it works on laptops, desktops, tablets and phones and you can keep up to date on Twitter, Facebook, G+, and the project’s own blog. 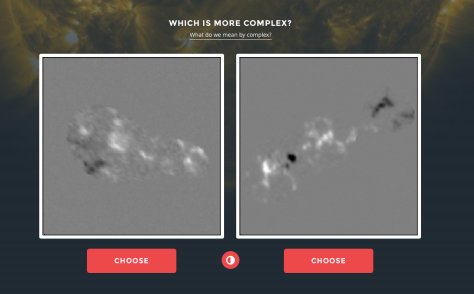