In the first of our new series of ‘meet the researcher’ blog posts, let me introduce Philip Fowler, who leads our Tuberculosis-fighting project, BashTheBug 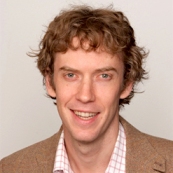 I’m part of a project, CRyPTIC, that is collecting samples of tuberculosis around the world. So there are lots of scientists I’ve never met in labs in other countries who prepare the samples, inoculate the plates and take the photos that ultimately end up on BashTheBug.

All the photographs you see are for a series of wells containing a single antibiotic. There are a few with 5 or 8 wells, but most antibiotics have either 6 or 7 wells. As you head from left to right, each well contains double the amount of antibiotic as the one before. Each strip of wells has been cut from a single photograph of a 96-well plate that contains 14 different anti-TB drugs in total. And each plate has been inoculated with a sample of M. tuberculosis taken from a patient somewhere in the world and incubated for two weeks. We hope to process 30,000 plates which means 6.3 million classifications over the next few years…

Umm, writing the software that cuts up each photo of a 96-well plate into smaller images for uploading to the Zooniverse.

Our volunteers have found some artefacts that we completely missed. One person spotted fuzzy patches in the last well for one drug; turns out this is the drug clofazimine crystallising in the bottom of the well as it is present at such a high concentration!

BashTheBug won the Online Community Award of the inaugural NIHR Let’s Get Digital competition back in August 2017.

Having shown the project to lots of people what has been really interesting is it ends being a test of how optimistic or conservative you are; people who are the latter will say any small spot they see is bacterial growth, whereas the former tend to say “nah, that is really small so I am going to ignore it”. Fortunately we are asking enough people that this averages out!

We are currently trying to work out how to best build a consensus from all the classifications our volunteers have done; watch this space. Anything we do intend to publish we will first submit to the biorXiv so volunteers will be able to freely download our manuscript.

Oh, and someone mentioned us in a poem.

A subversive one: is a crowd of volunteers more accurate and/or consistent that an expert?

A left-field one: which genetic mutations in M.tuberculosis confer resistance to certain antibiotics and, equally importantly, which do not?

Beyond a lot more data? Hmm.

We’ve got a new design of 96-well plate on the horizon, also we want to pool all our data to see if using something like Zooniverse, but in a clinical setting, could be used to help deal with difficult cases in a hospital lab.

I’m also thinking of better ways to engage with the volunteers – more soon.

I love SETI@home as it is a bonkers idea, has been going for about 20 years and was the inspiration behind the BOINC framework (https://setiathome.berkeley.edu).

Just try creating a test project, it is easier than you think!

On one of my bikes, or playing Minecraft with my two daughters.